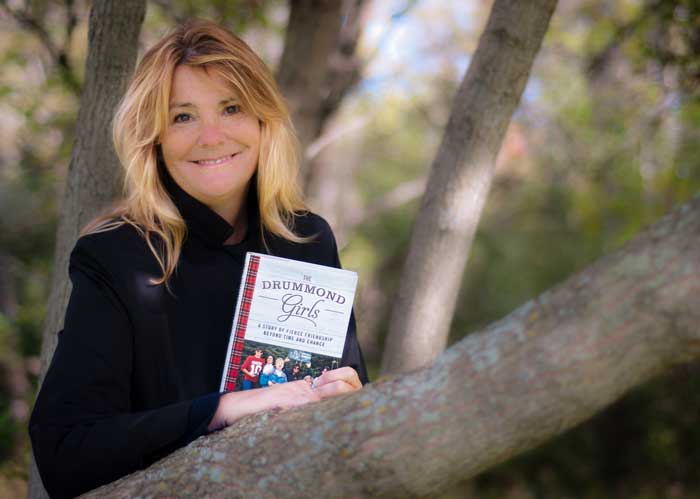 Mardi Jo Link’s book The Drummond Girls: A Story of Fierce Friendship Beyond Time and Change is a book that might just inspire a personal revolution. Her memoir of eight friends on an annual weekend getaway to Drummond Island in Northern Michigan is described by Link as, “A group of energetic misfits pools their resources, leaves their familiar confines in a huff, docks in a strange land, and parties like Vikings.”

The book will leave you longing to start your own group and travel to an isolated destination for some purposeful debauchery and bonding.

Link has written five books, and is the Heartland bestselling author of the critically acclaimed memoir Bootstrapper. This book won the Great Lakes, Great Reads Booksellers Choice Award. She is also the author of Wicked Takes the Witness Stand: A Tale of Murder and Twisted Deceit in Northern Michigan, When Evil Came to Good Hart and Isadore’s Secret.

I interviewed Link at an author event in Harrisville, Michigan where the local library scheduled a community read of her book, The Drummond Girls. Many of the women shared about their own groups, how they started, and the number of years they’ve traveled together. Since the release of the book, the timing of the Drummond Girls trip has been rescheduled to ward off some slightly ‘stalker-like’ behavior from the general population.

The Drummond Girls first trip — imagined by Linda, the ‘alpha girl’, and organizer of the trips both logistically and fiscally — was supposed to be a one-time retreat to dissuade a co-worker Jill from getting married.  Linda, Jill, Andrea and Link all waitressed at Peegoes in Traverse City. Link was on trial as a participant that first year and desperately wanted these women as friends. Linda added four more women — Susan, Pam, Mary Lynn, and Bev — after year two to offset some of the costs.

They couldn’t have been more different.

Link said, “Within the group is every combination of married, divorced, remarried, and staunchly single. We’ve got graduate degrees but also high schools diplomas barely and miraculously bestowed; world travelers and homebodies; Republican, Democrats, and several who self-identify as members of the ‘None-of-Your-Damn-Business’ Party. Besides Drummond Island, Michigan, the one thing we share is a puritan-esque independence. And by that I mean that one Drummond Girl does not ask another Drummond Girl for anything very often. When one does, no matter what it is, you do not say no.”

The group encouraged Link to write their story from her own perspective and she finally came around to the idea.

From 1993 to 2013, Link relives the adventures of these women crossing a bridge, lining up for the ferry, and landing for a weekend of off-roading, drinking, and sharing – no men allowed. The result is a beautifully written memoir of a twenty-year friendship between fiercely protective women with the motto, “What happens over the Mackinac Bridge stays over the Mackinac Bridge.”

Link said, “I’ve been back in Michigan since 1990 and I’m here to stay. I’ve traveled quite a bit domestically on book tours and speaking engagements and there really is no better state, no more beautiful or diverse state than Michigan.  I live in Traverse City, also know as ‘The Riviera of the Midwest’, but I visit our family cottage in Ossineke in the summer in order to get away from the west side’s thick tourist traffic!”

Link was born in Detroit, and raised in Battle Creek, Flint, Kalamazoo and Bay City. At Michigan State, she intended to study veterinary science and ended up in journalism. She’s lived in New England where she cut her teeth as a reporter for a local paper in New Hampshire. She worked as a police and general assignment reporter, magazine editor, and freelance writer. Link said, “I moved back to Michigan to raise a family. After twenty years of marriage…I became a single parent in 2005. My children were 9, 12 and 14 at the time. That first year was tough. I detailed some of our hardships in a memoir, Bootstrapper. It was my women friends who helped pick me up, dust me off, and keep going.”

That story provided the raw material for The Drummond Girls.

Link said, “I was the kid with a notebook in her pocket. I’ve just always written, probably because I was such an avid reader.  I wanted to write things that made readers feel the way my favorite writers made, and continue to make, me feel — transported, inspired, informed and moved. In high school, I took all the English classes I could. I studied journalism in college. I filled notebooks and diaries and journals with my writing. I made newsletters and wrote bad poetry and random short stories that went nowhere. I have the proverbial “novel in a drawer” and a stack of personal essays that have never seen print. I was also lucky enough to be raised by parents who valued literacy.”

In describing what she does professionally, Link said, “I make sentences.  From those sentences, I make paragraphs. Then pages, and finally, if I’m lucky and I’ve done the work, and I’ve done the revising and the research, those pages add up to a book people want to read.  This might sound basic, but it really is the process! After five books, it continues to amaze and delight and humble me that I get to do this for a living.  I now spend some of my time helping other writers get published via my personally tailored editing and consulting services.”

Link told me her expertise is in determination. She said, “In terms of writing and publishing, I’m good at taking a whole lot of facts, research, information, complex feelings, and chronologies, and distilling them into a written narrative people can understand and feel emotionally drawn to. I’m skilled at navigating past bureaucracy and negativity.”

“Writing is hard, lonely, often thankless and poverty-inviting work. It is also the most satisfying, thrilling and intellectually rewarding work I can imagine. At this point in my life and my professionally career, I’m probably unemployable. I’m too bullheaded.”

~ Care less about what other people think.

~ Care more about striving to improve according to your own standards of excellence.

~ Pay less attention to people who tell you why you can’t do something.

~ Pay more attention to the people who are doing what you dream of.

~ Nurture your own version of creativity.

Visit Mardi Jo Link’s website: mardijolink.com to read her blog, reviews, and attend events. The paperback of The Drummond Girls will be printed in January.