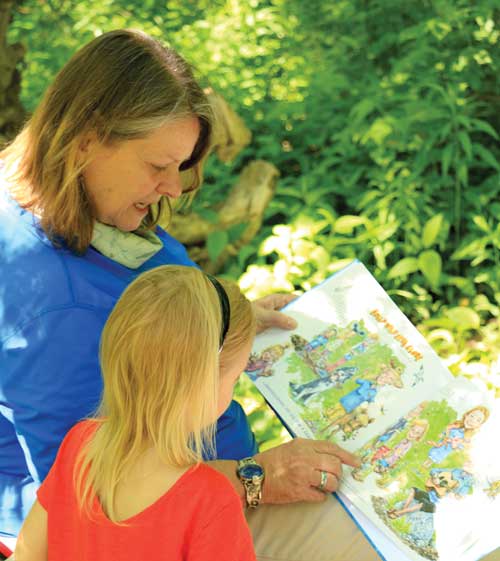 Hungry for story and curious for adventure, children’s author and illustrator/fine artist, Lori Taylor can be found exploring her silliness in nature looking for her next story to tell.  A mother of “two awesome, talented grown kids and grandmother to two amazing, talented granddaughters” with a third grandchild, a boy, on the way in August, Taylor is a true Michigander, born in Pontiac and raised in Clarkston.  She raised her family in Goodrich, moved to Pinckney and now lives in the heart of the Manistee National Forest in Bitely, Michigan.  Her surroundings are the perfect place for her to explore the thoughts that form her next book ideas.  She is fierce in love and fierce in her time alone as she loves her solitary moments and days.  She claims to be cautious when it comes to outdoor adventure, yet she does things to test her physical abilities.  She loves to laugh and loves humor so her silly moments in nature and in public allow her to laugh at herself and give her a unique look at life.  She is a storyteller in picture and in word so she wanders in search of tales.  She freelances in illustration as well as writing, illustrating and designing all of her books.  She markets her books and visits schools to gain exposure.  She is a woman in charge of her world.

Taylor grew up on five secluded acres in Clarkston, MI, a virtual woodland and pond-stomping playground. Her family didn’t travel or vacation because they already had the best place to escape from the world right in their backyard. As a teen, Taylor loved science and art and wanted to illustrate. One day, her parents informed her that she would not go to college and that she needed to get a job. She remembers that being a painful wake up call.   She realized she needed to shift her focus and so she took medical office assisting in high school, all the while longing to illustrate. After finishing high school, she worked as a laboratory assistant drawing blood. After getting married, the opportunity arose which allowed Taylor to trade the needle for a pencil. She had her kids in her early 20s and loved and shared every moment with them. She took them fishing and into nature, taught them the same things she had learned by volunteering at a local nature center. All the while, she still yearned to illustrate so she self-taught herself in art and ended up freelancing for the nature center. She began to show her artwork at art shows with wildlife art.  During all of this new excitement, Taylor still had stories for books that  loomed in her mind. After her kids were in high school, she decided to invest in herself and began to take a course at  the Institute for Children’s Literature. She was dedicated and writing all the time, drawing, observing nature while the kids were in school.  She calls this period her, “learning time”. She received exhibit making projects from Huron-MetroParks and learned with every project that she researched and created.  She was determined to make art a career. It took a long time for her  to consider herself an artist, let alone an author when her first book from Publish America came out.   Taylor calls that a learning experience, as well. She went on to illustrate another book for a client at the time her first book came out. “I started to feel legit—slightly”, confesses Taylor. She decided to  join the Society of Children’s Book Writers and Illustrators, a fabulous group of people who are interested in writing but don’t know where to start.  She still belongs to the group and enjoys the conferences and comradely.

Art remained first and foremost for Taylor and helped her as she started going through some life changes about the time her mother died in 2006. She was selected by the Sleeping Bear Dunes National Lakeshore for the artist-in- residence program in 2007 when her life took “a horrific tumble”.  Her father died and Taylor was headed for divorce, all at the same time she won the residency. She was in a cyclone of emotions and the residency became three weeks of a solo-solitary test from the Universe. She had never gone anywhere alone. She packed up her entire studio into her van and headed north to Empire. She stayed in the Park’s farmhouse and wandered the shores and waters. She would sit in her kayak in the small lakes and think and try to figure out her life. Taylor did a lot of sketches, took photos, and began creating her art piece that was to be donated to the Park. The art contract gave her a year to complete the project but she had no idea as to where home would be after her stay. Things were that bad. The creating of that art was extremely emotional, something that the public would never know. Taylor  created the piece, still on display at the Philip Hart Visitor Center in Empire, with layered watercolor images mixed with her own poetry, “The Legend of the Sleeping Bear”. The story of the mother bear, ever watchful for her cubs still makes her emotional. She wrote the entire poem to the meter of the Song of Hiawatha for the public presentation and unveiling of her art. There was not a dry eye in the crowd of aquatic engineers and biologists that day. With her impending divorce on her horizon, this piece…this trip was the beginning of her life and end of her 27 year marriage.

Taylor explains it as a time of peace that she would need before the tumult and death of who she was and had been.  She moved to Pinckney with her partners, Marie and Lisa, where they combined their businesses into Bear Track Studios LLC. It was a rough time for Taylor.  She was trying to figure out who she was and what her purpose would be and still be grandma and mom. Her family had disowned her during that time and had moved over an hour away from friends.  She says it was like being in solitary confinement—but in her mind. She had survived a living death and had to recreate herself. She was still feeling restless and Pinckney didn’t feel like home for a long time. She was having a rough time with art and one of her partners, Marie, suggested that she try writing books. Given the green light, Taylor took flight. Her partners are deeply involved with the editorial process as well as being wildlife artists themselves. Marie is a pen and ink artist and Lisa is a woodworker. They travel in a herd or pack and contribute and support each other in their work and lives. They lived together with dogs, cats, chickens, and Taylor’s pet snake for almost ten years until this February. That’s when the three of them, Lisa, Marie, and Taylor picked up and moved across the state, west and north to settle in an amazing place. Bitely. In the forest, on a lake. Life is supreme. Every day is a blessing. “Peace reigns in my heart and life once again,” Taylor confides. The three of them are living the dream and they pinch themselves daily—usually when they are out fishing for dinner in the rowboat on their lake.

Taylor has written many books and is always working on something.  When asked to speak on one, she choose her book, Holly Wild, her ten-and- a-half- year old heroine! Taylor describes her character of Holly as “adventurous—in her mind most times. She is clumsy, here big feet and heart get ahead of her and she trips and falls. She thinks she’s super cool, times ten. She is me. My inner explorer girl. When I was growing up we girls didn’t have heroines that wrestled gators and climbed “almost” mountains. My older sisters had Nancy Drew, but I had Pippi Longstocking. I wanted someone in the middle. Holly Wild and her friends are out there solving mysteries, in a hilarious way. I learned you can teach by using humor (from my MetroPark farm sign days—Technicolor cow udders!) and Holly teaches well. Like me, she laughs at herself. I call myself the “bumbling naturalist”, I run into nature and then find out what I ran into. I take Holly with me wherever I go. Heck, she was with me when I fell off the dock and into the cold lake here a month ago. I have many Holly moments! But she never lets things get in her way of learning and experiencing life. She is the bull in the china shop.”

Taylor is constantly incorporating elements of her life into her books.  She writes about the areas she has been to and the stories that were placed in those areas before her.  Her books are filled with little discoveries for her readers.  From nature knowledge and tricks all the way to the titles of her chapters, Taylor put treasures in her pages.  For example, The Holly Wild series chapter titles in order are Bamboozled on Beaver Island, Let Sleeping Bear Dunes Lie, Packing for the Porkies (Porcupine Mountains), and Questpedition for da Yooper Stone. Taylor says these came from her vacation experiences and artist-in- residences in Michigan. The titles alone illustrate the humor inside the pages of her books.

Her books are not just for kids, either.  You should buy her books not because you have kids 7—12 years old, but because you like a good story.   The stories are funny, they have science, history, myth and legend, flora and fauna of each place—but wait, there’s more! They have heart! Holly’s team of pals and fellow investigators work together, respect each other, learn from other and sometimes disagree. But they support each other. It is good story. Her characters have touched her life, and they touch others. Kids, her biggest audience, tell her often of how much they enjoy her books and characters. She has many 12 year old boy fans of her Holly Wilde series.  Just because she’s a girl—a girl in hiking boots and hat with a pet snake, boys still like her. She’s handing them life lessons and story. The real way to teach. Lori Taylor’s books and new coloring book are available on her website: www.loritarylorart.com and they are sold in Michigan’s national and state parks, Indie book stores, and gift shops—the list is also on the site. (The books are published by her under Bear Track Press)

Taylor says she would like to do more “big people” art, write and illustrate more books, and keep her amazing life in Bitely going.  She claims she “will never—be able to retire since she is a self-employed artist! Being all of this allows her grandma time and she hopes to volunteer in the area after she gets settled. Taylor says her best advice to all is to “dance with life” and we couldn’t agree more.